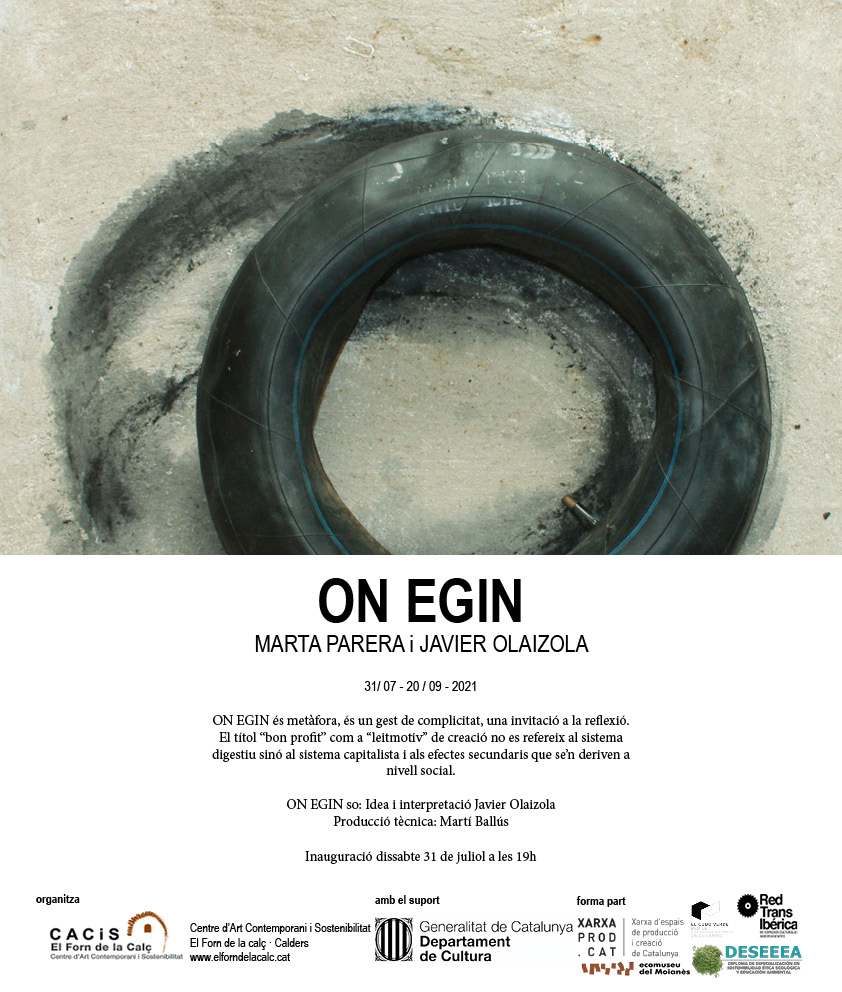 ON EGIN – ENJOY YOUR MEAL

or … awkward self-reflections from the couch

ON EGIN is a metaphor, it is a wink, an invitation to reflection.

The title “bon appetit” as a “leitmotiv” of creation does not refer to the digestive system but to the capitalist system and the secondary effects that derive from it on a social level.

With uncertainty and unease, questions arise:

How can we digest this Machiavellian menu from a world subjugated by savage corporatism?

Do we have any responsibility in all this? … Can we do something to change things?

… Or are we simply spectators of a crime?

Do we allow ourselves empathy or is it just a discourse that works in theoretical practice?

Shall we play Virtual Revolution? … And where is real action practiced?

The occasional solidarity clouds our conscience, it becomes a palliative of an ethics à la carte….

How does escape sound? The steps when you flee leave a mark

Could they be avoided? Perhaps walking backwards, of course in a flight there is fear and fear is smelled, that is, it always leaves its mark.

Where surely the steps do not leave a trace is in the sea, there are only remains, and sometimes not even this.

Silence devours anonymous bodies. And our silence, what does it taste like?

We live in a world full of inequalities, sometimes oblivious to what happens to our neighbors, some standing in line with hunger and others selecting the best jabugo ham.

Would it be lawful for those who have the least to come with a machete to take away the ham?

The tellers dispense money and at the same time are the fall to the well for those who do not have.

Go hungry, the real one, the one that I have not gone through, not that hunger after lunch and before dinner. Hunger

…Or how the global realities present day by day feel on our stomach.

The menu they offer is priceless:

A few so much and others so little

Do we think collectively? … large corporations yes, they appropriate the wealth that we all generate, create an enslaving system at work … but who collects profits? …they divide us and win

Can we be consistent from the vision of the first world? Indifference! We are conscious?

Where do we put the limit line of our complicity with the system of inequalities?

marta parera‘s proposal is fueled by self-reflection, by the discomfort caused by the ineffectiveness of bad political practices. The work has a base impregnated with ashes as a reference to something devoured.

Some form or word, suggests part of a “human shipwreck”, elements that have been dispossessed of a place, have no landscape or habitat, a sea without water or an empty boat. Anonymous absences challenge not only the gaze, but also the mind.

Starting from a concept of formal art, they are surfaces that want to emphasize the ethical part of aesthetics.

As Jacques Rancière expresses in his book “The discomfort in aesthetics”, we are facing a philosophical paradox. The historical journey of the arts puts us before an aesthetic judgment concluding that the “disinterested” art that grows despite “the negation of the social” no longer serves us.

“Aesthetics is not politics by accident but by essence. This is the unresolved tension between two opposing policies: to transform art forms into forms of collective life and to preserve the autonomy that entails from any militant or mercantile commitment, a promise of self-determination “J.Rancière

javier olaizola vindicates his trade as a stonecutter, working with hands and craft tools. His trajectory of working with stone keeps him committed to respecting the natural, the land that offers us so much and we punish it so much. In the artistic field, he explores the limits between use and the absurd … dishes that are not useful to contain food but to signify the absurd or to announce what we have eaten with our eyes closed.

In ON EGIN the tools are useless, parts recovered and re-signified. There is nothing that seems edible, except the questions that arise in each inspiration-expiration of our breath.

The exhibition is accompanied by a sound mattress created specifically for ON EGIN. A piece from the show “talking to the wall” creates the rhythmic background (Javier Olaizola and Harkaitz Martinez de Sanvicente) premiered at the Antic theater in Barcelona.